The trip to preservation

On Easter Sunday 1979, VIC 56 arrived at Sunderland on the first leg of her voyage into preservation....

Leaving HM Naval Base Rosyth on Maundy Thursday, she bore the wear of 5 years of lay up and missing essentials included any means of taking a bearing from the compass. On Good Friday a friend, John Allen, improvised a section of curtain rail and mirror fragment which worked well. Departing Granton at 7am, crewed by Chris Harris, skipper (ex RN Engineer), John, Peter Erskine, Julian and Henry Cleary the forecast was debated and a "set out and test how we go" plan was agreed. Could we anchor? Off Bass Rock the chain was hauled out and marked and we anchored successfully in Dunbar Roads. 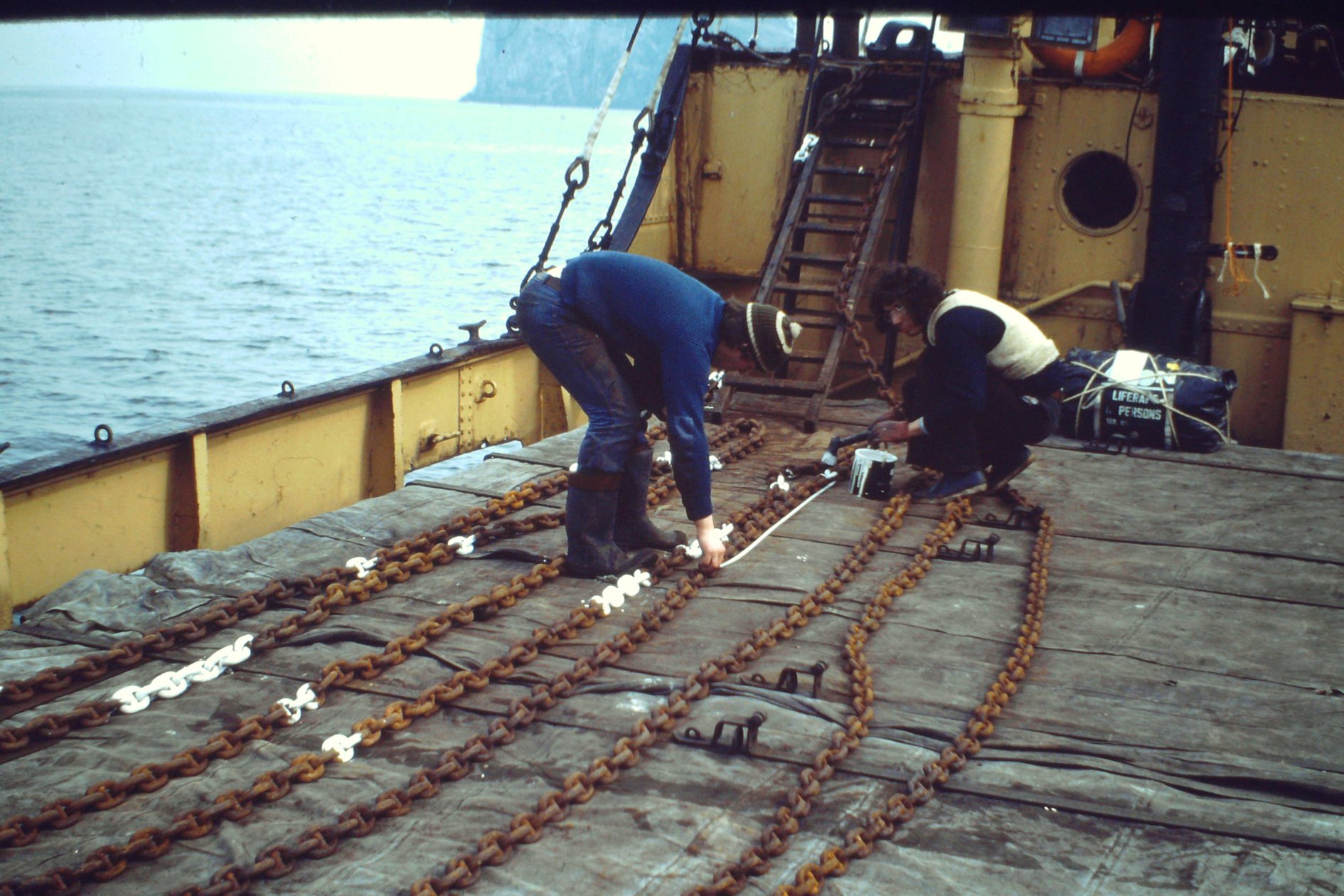 With better weather we continued through the night and entered Sunderland at 17.30 the next day - underway for 34 hours. It greatly helped that VIC 56 was still an oil burner! 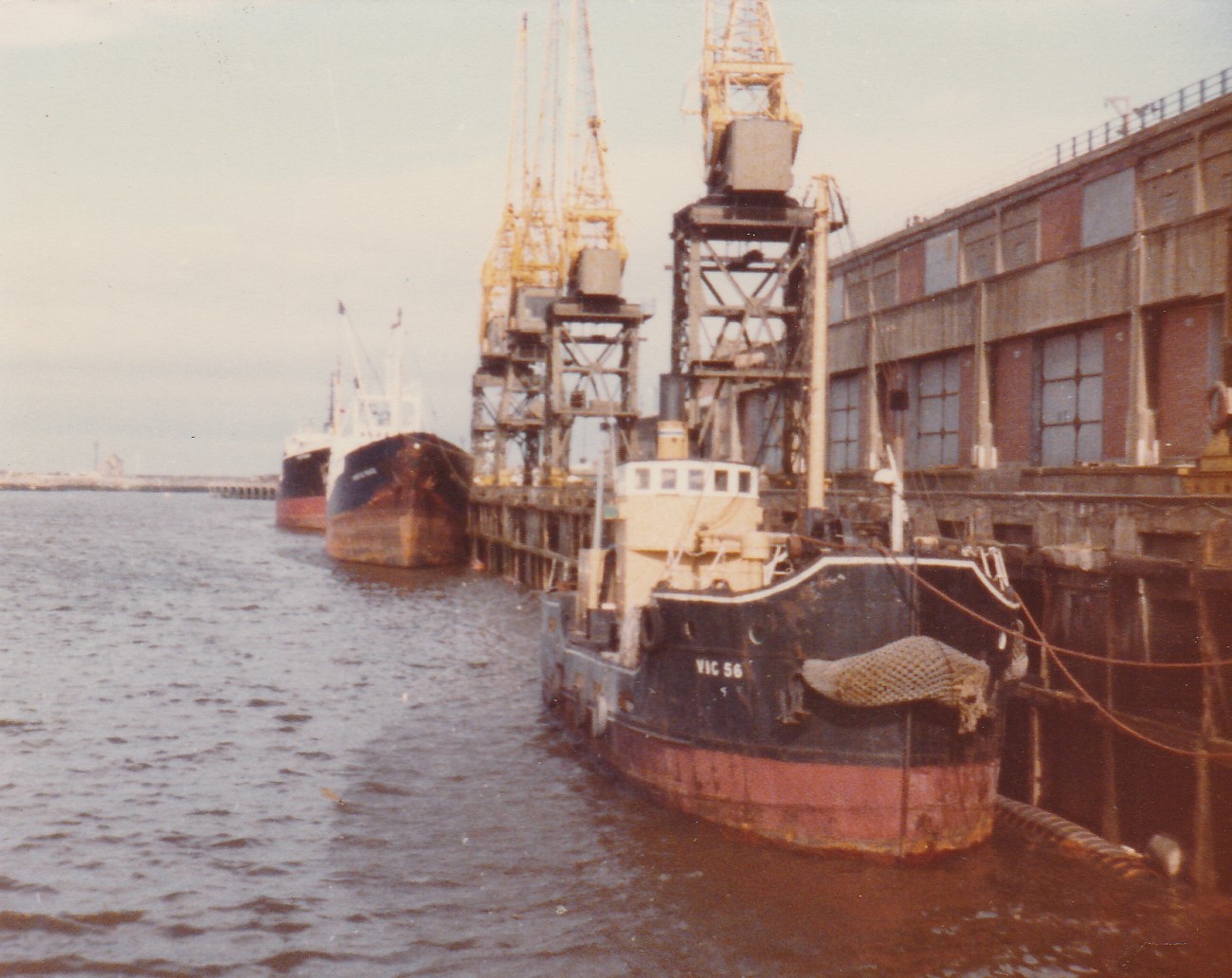 On 19th April 1979 Vic 56 completed the second leg of her voyage into preservation locking in at Grimsby at 20.45 having left Whiby the previous evening.Navigational aids were limited to a compass and a radio. Seeing and being seen was the main concern and as ever the Navy stepped in hour of need and CPO Bill McLelland (HMS Caledonia, Rosyth, ERA Training) came along and brought nav lights he had made for the purpose.

On 19th April 1979 Vic 56 completed the second leg of her voyage into preservation locking in at Grimsby at 20.45 having left Whiby the previous evening. Navigational aids were limited to a compass and a radio. Seeing and being seen was the main concern and as ever the Navy stepped in hour of need and CPO Bill McLelland (HMS Caledonia, Rosyth, ERA Training) came along and brought navigation lights he had made for the purpose. 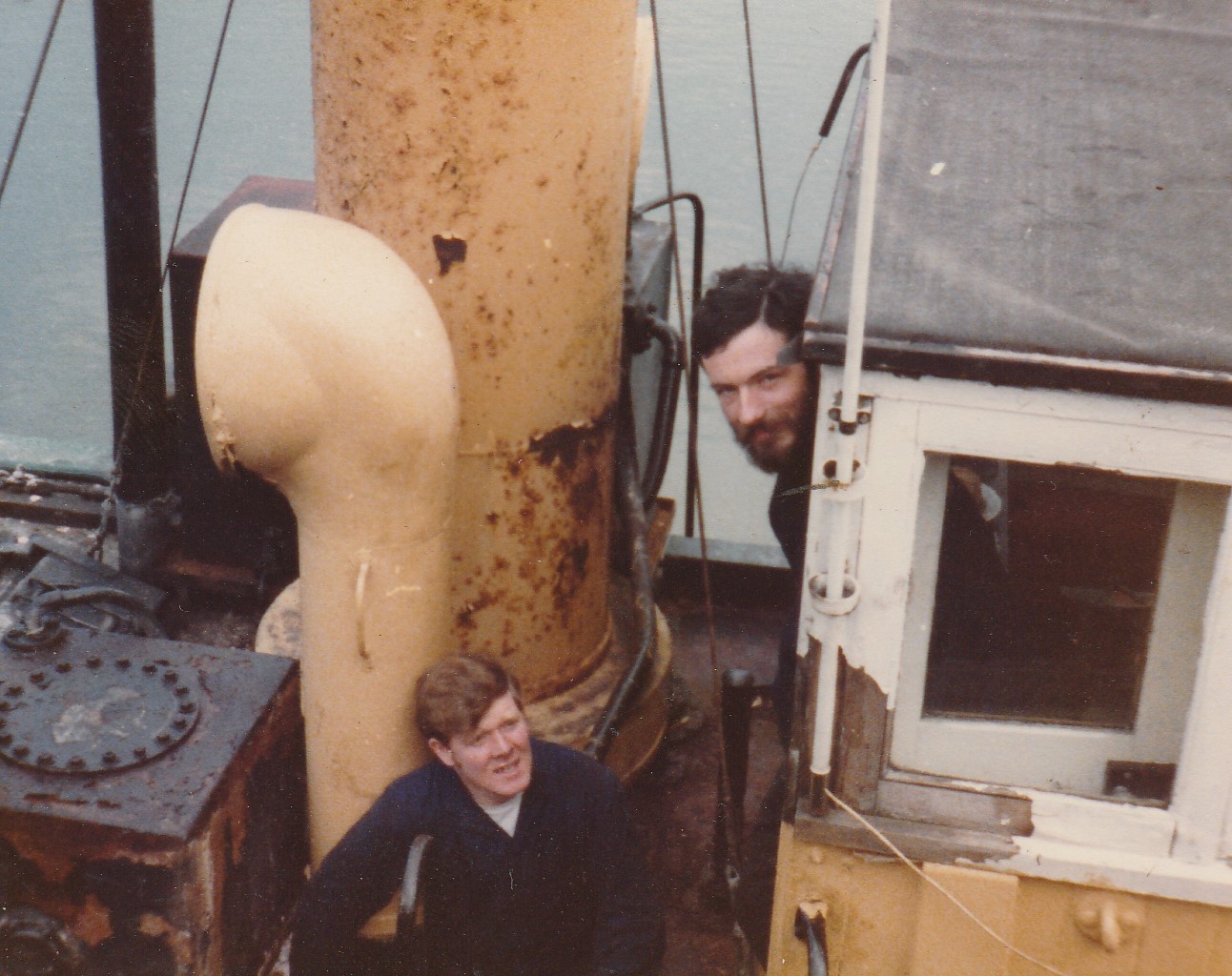 From 20 April to 19 May 1979 VIC 56 remained in the Alexandra Dock Grimsby while the volunteer crew replenished their leave allowances. Ordering oil fuel required special permission (after the Iranian revolution cut supplies) and a visit to Shell House in London.

At anchor in the Wash

On Saturday 19 May 1979, having taken on 4 tonnes of fuel, VIC 56 steamed out of Alexandra Dock, Grimsby on the next leg of her voyage into preservation crewed by Chris Harris, skipper, Dave Morphew, Engineer, Stephen Jenkins, Randal Grey, John Harris John Hurdle and Henry Cleary.

That evening we were to learn of her limitations going into the weather as the sea and wind increased and Skegness stayed abeam for most of the night. Sleep in the focsle against the waves was a challenge. At 10.30 we anchored off Lynn No 1 buoy to face a new problem - elderly rusting steamships not popular in the Wash. 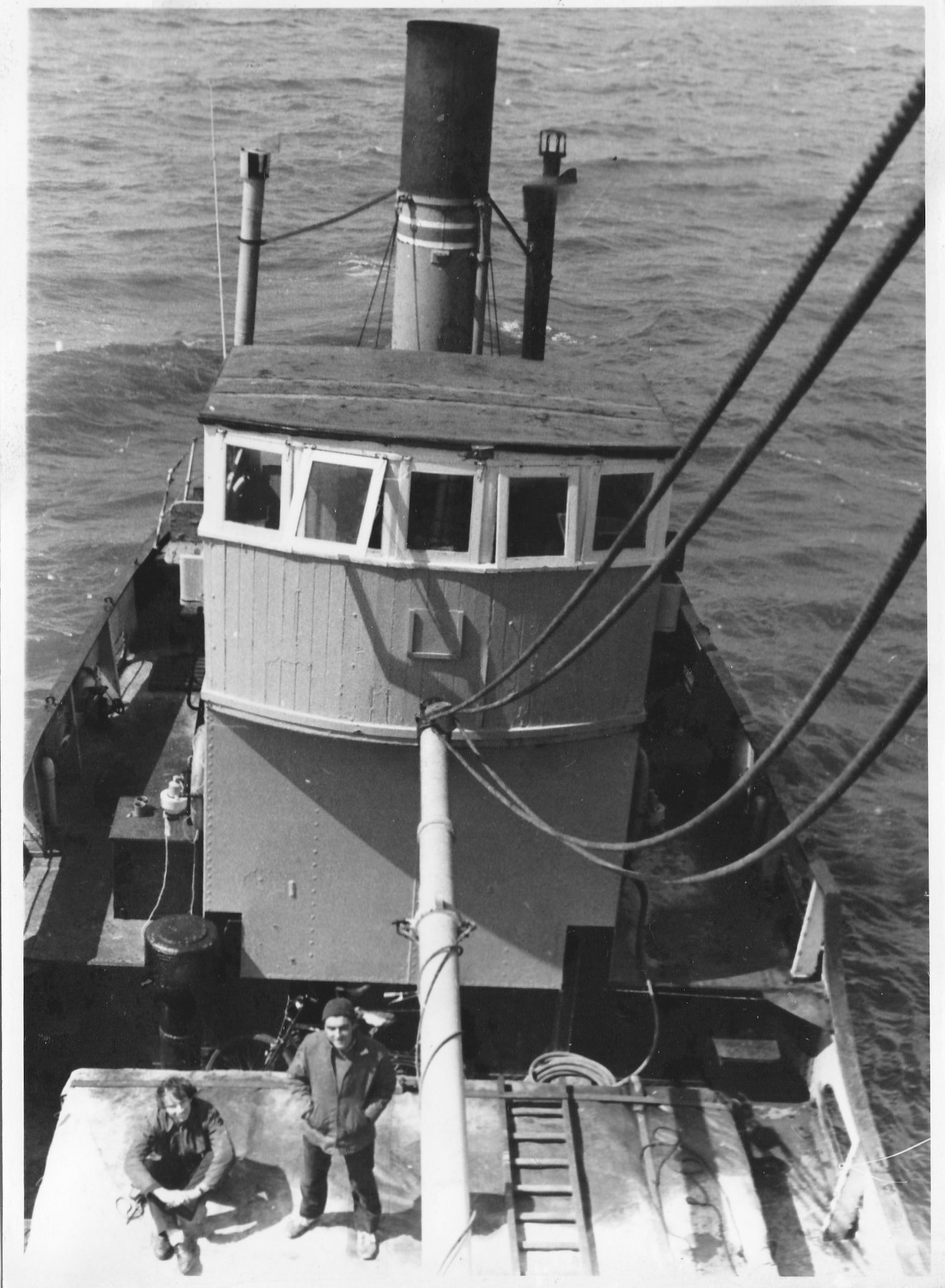 King's Lynn refused a berth and the next day so did Boston. On the 22nd the Wells Harbour Master, Mr Smith agreed to help. Weighed anchor at 07.00 on a fine bright calm day and at 14.45 anchored off Wells. The Harbour Master boarded and brought the VIC into the quay to great relief and thanks. His father had brought VIC 56 into Wells on her first voyage north in 1946. The crew, now 48 hours overdue, scoured town for a taxi and despite a breakdown just made the last train to London from Norwich. 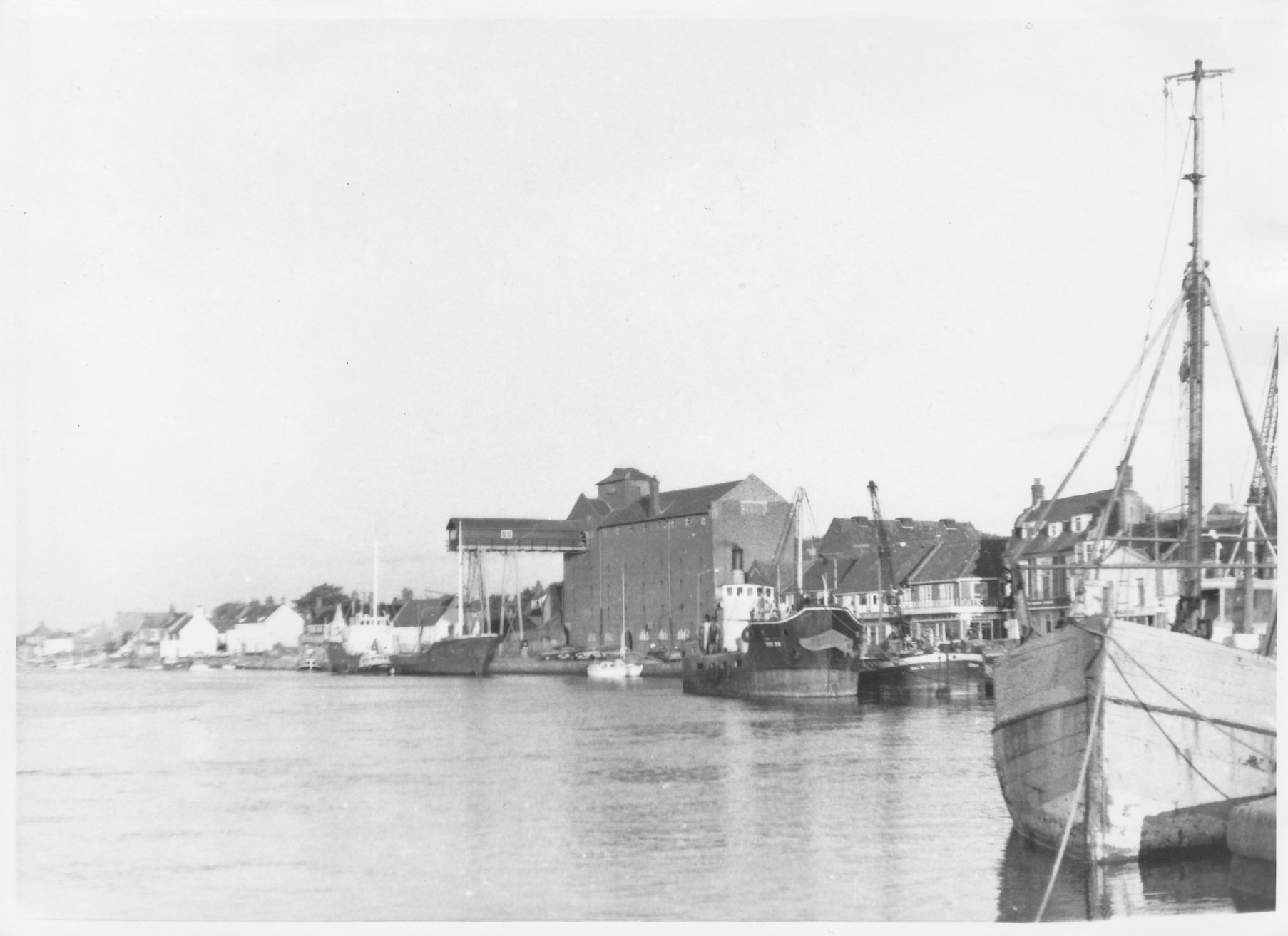 On Sunday 27th May 1979 Vic 56 steamed out of Wells with helpful pilotage from the Lifeboat Mechanic. 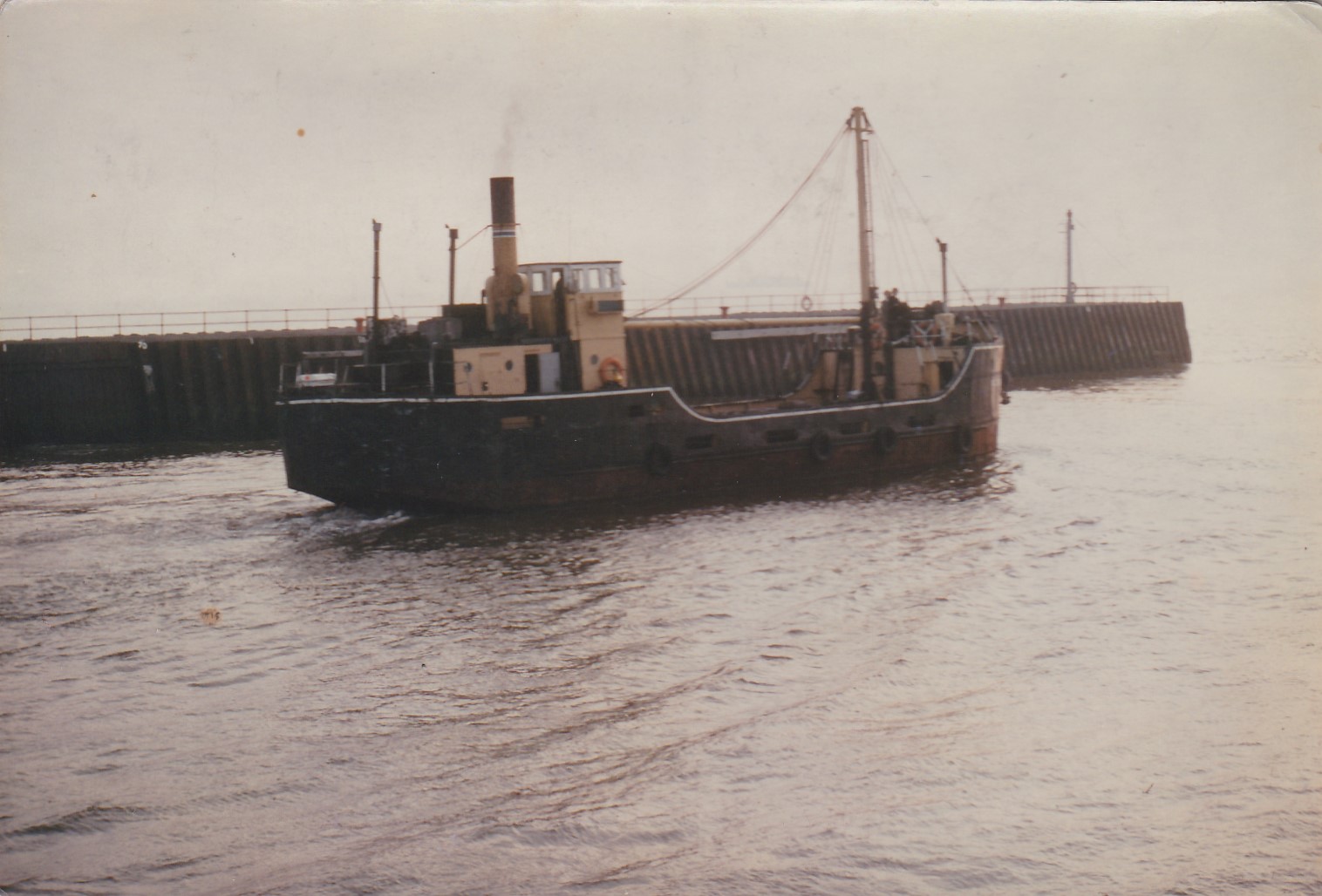 In good light and slight sea she anchored off Mundesley for 4 hours for better tide and at 21.20 the Yarmouth pilot boarded, unsure if she could make it through the entrance. Having previously kept to the Rosyth advice that 100 revs would prevent problems, Engineer Dave Morphew opened the throttle to the maximum achieving a never equalled 140 revs to get through. Next tried a textbook turning on the anchor in the river to stem tide for a berth on Gorleston side. There for 2 weeks looked after by Aelmuire, Monica and Julian before leaving to sail south.

A weight off our minds!

Sometimes an experienced seafarer smiled kindly on VIC 56 and provided gifts or help in hours of need. For our voyage south HM Naval Base Rosyth provided 4 x 5 ton mooring sinkers as ballast and steering was better. In more sheltered waters and to get to the bottom they seemed better out than in. 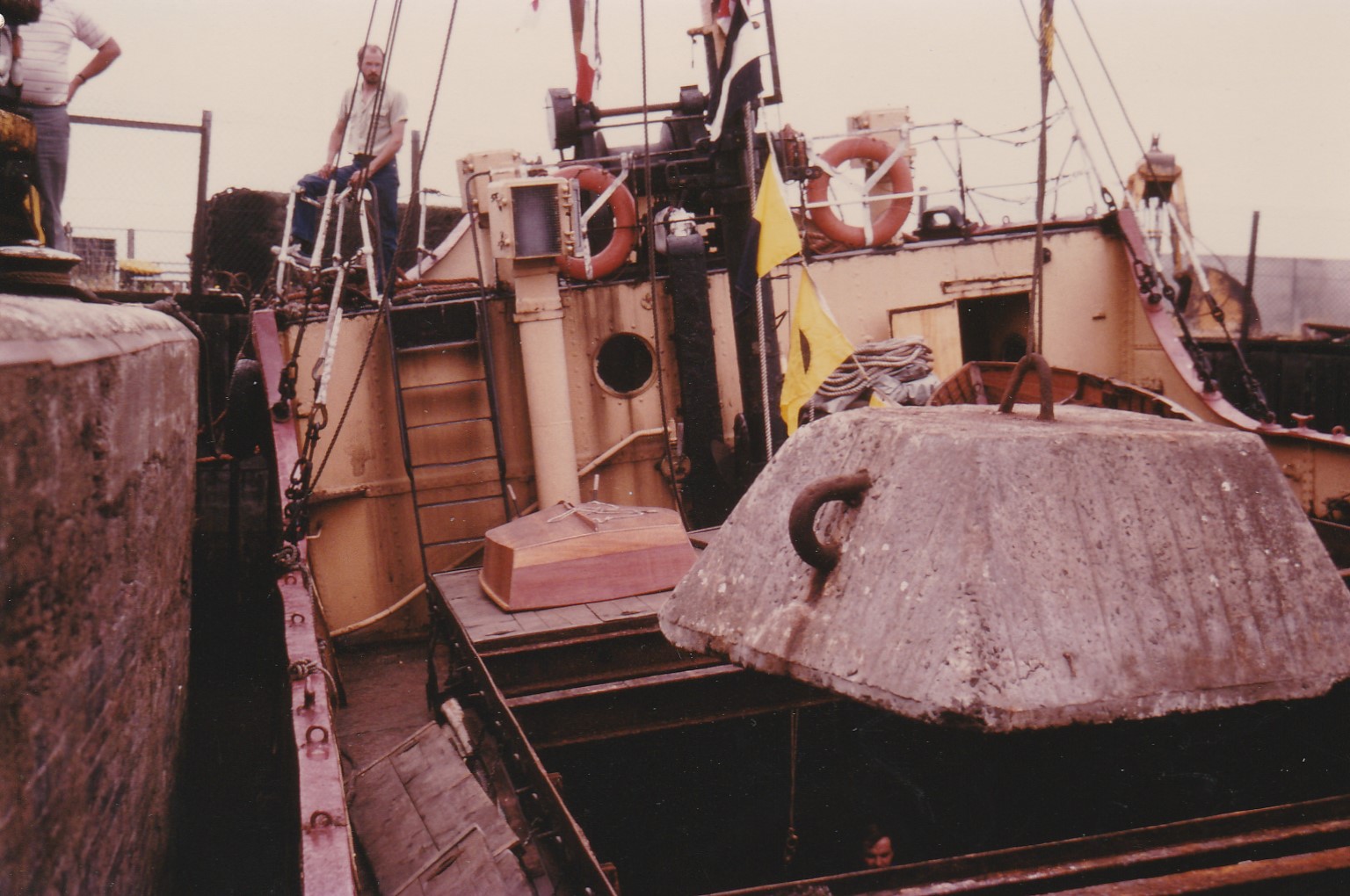 The PLA kindly agreed to add them to their collection, lifting them out at the Gallions Depot on 29 July 1981, Charles - Diana Wedding Day (flags). Woolwich Radio broadcast the vows on VHF Channel 14. 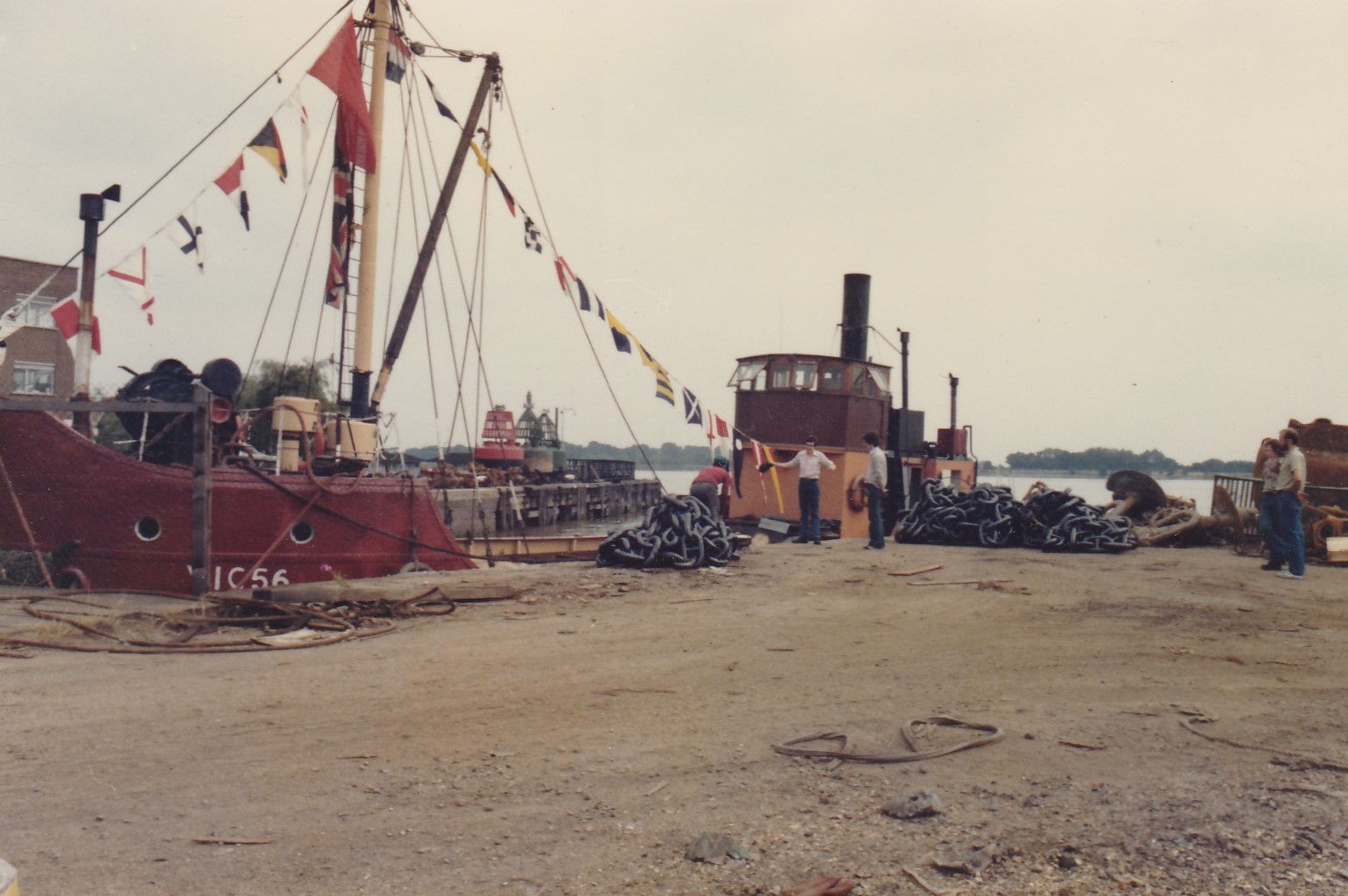 Radio fails at a critical time!

Enjoyable stay in Yarmouth, though elderly gent visited most days to intone "Built for one trip only". At 5 am on 9 June 1979 departed on final leg of journey into preservation. With 4 engineers on board (Chris, Dave, Howard and Dave Dean) speed was good and anchored at Leigh at 21.45. Passage up the Thames next day went well but could not raise Woolwich Radio on old crystal set VHF. Now approaching Thames Barrier under construction (one way working) so raised Flag D. Call to overtaking BP Rapid via rolled up chart successful and 13.30 on 10 June berthed at Greenland Dock entrance in pre-regeneration Docklands. A few weeks later a short thank you trip for many of those who gave time, money or help in kind to make all of this possible. 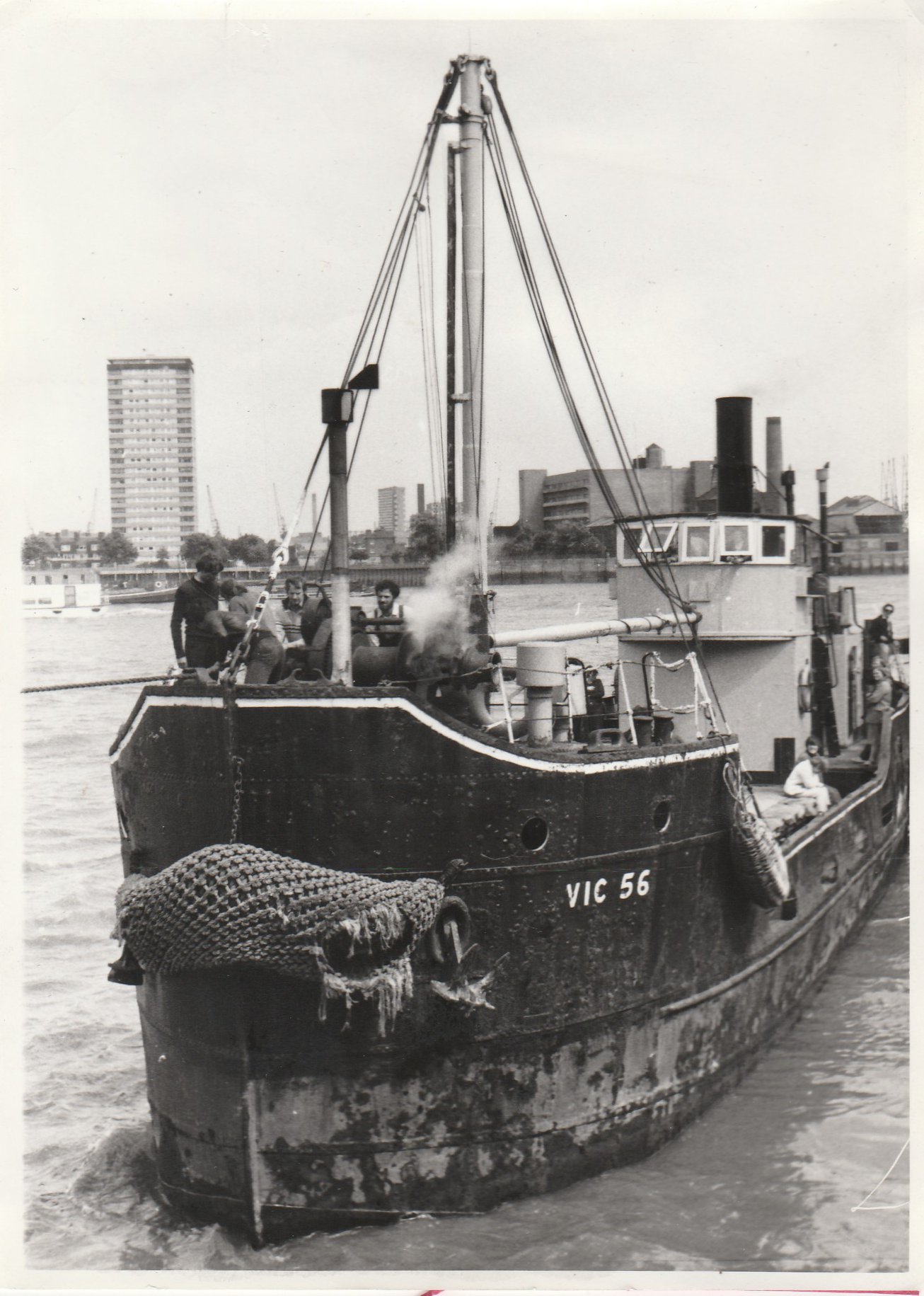 Living aboard (1979-81) helped repay the loans though it was cold after a day in the office...

A lot to learn!

Docklands before regeneration was a cheap berth and the Greenland Entrance had a lovely chalk campshed for work at low tide. Most riverside wharves still in use. Occasional visitors included Bob Partis' steam HSL "Puffin". 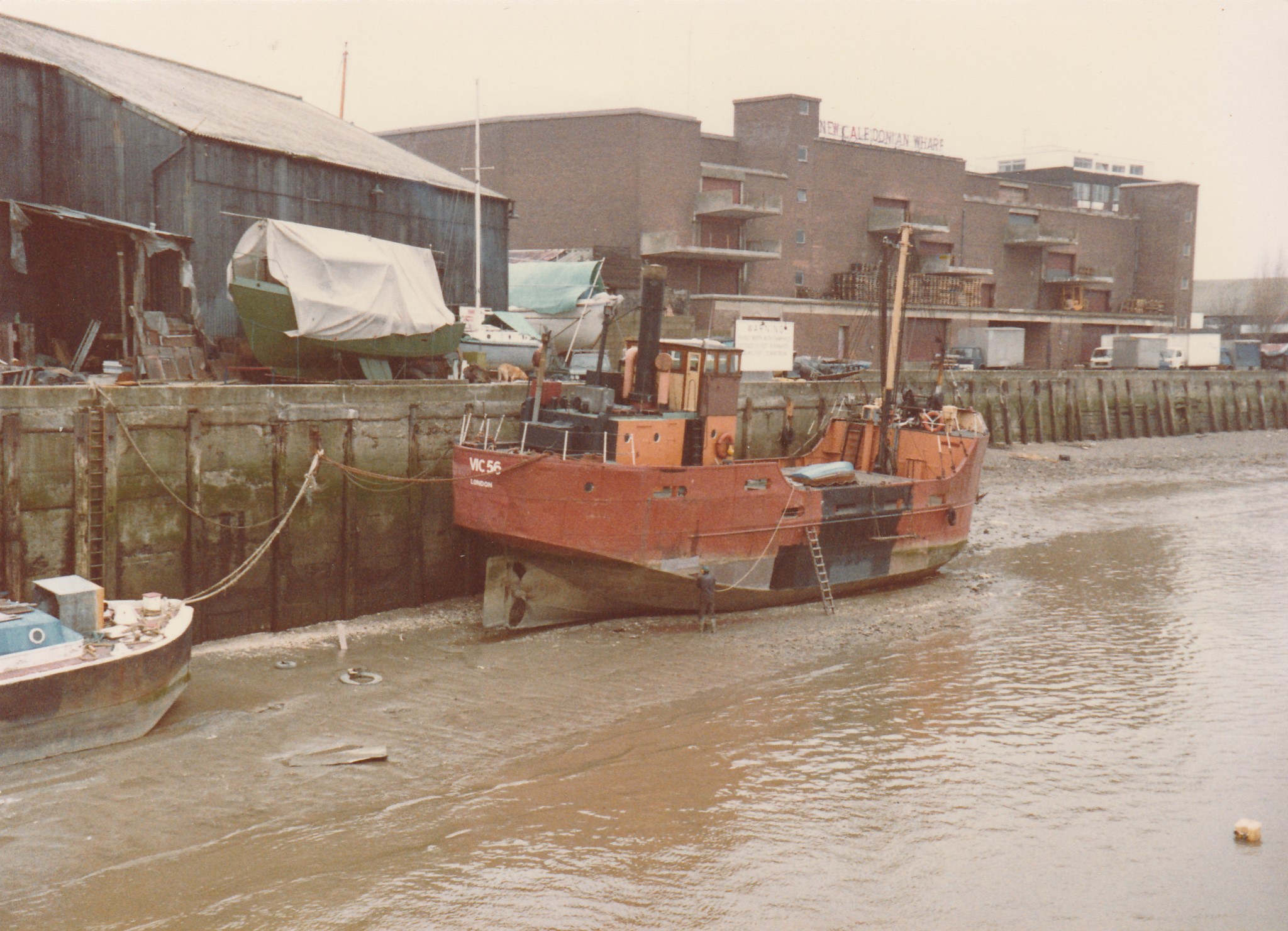 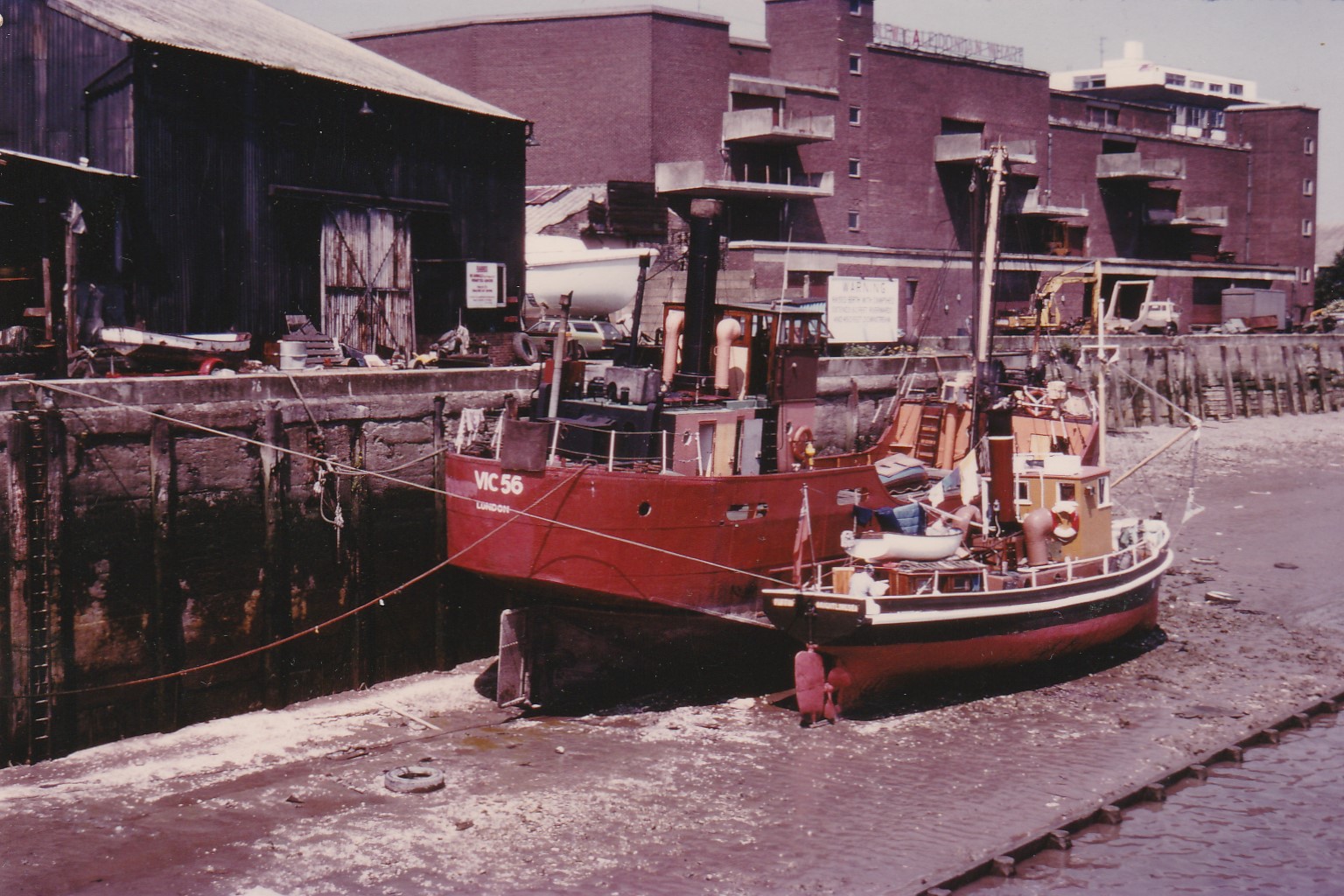 Crossing the North Sea in July 1989 strengthened by a retubed boiler and 3 (younger) engineers... 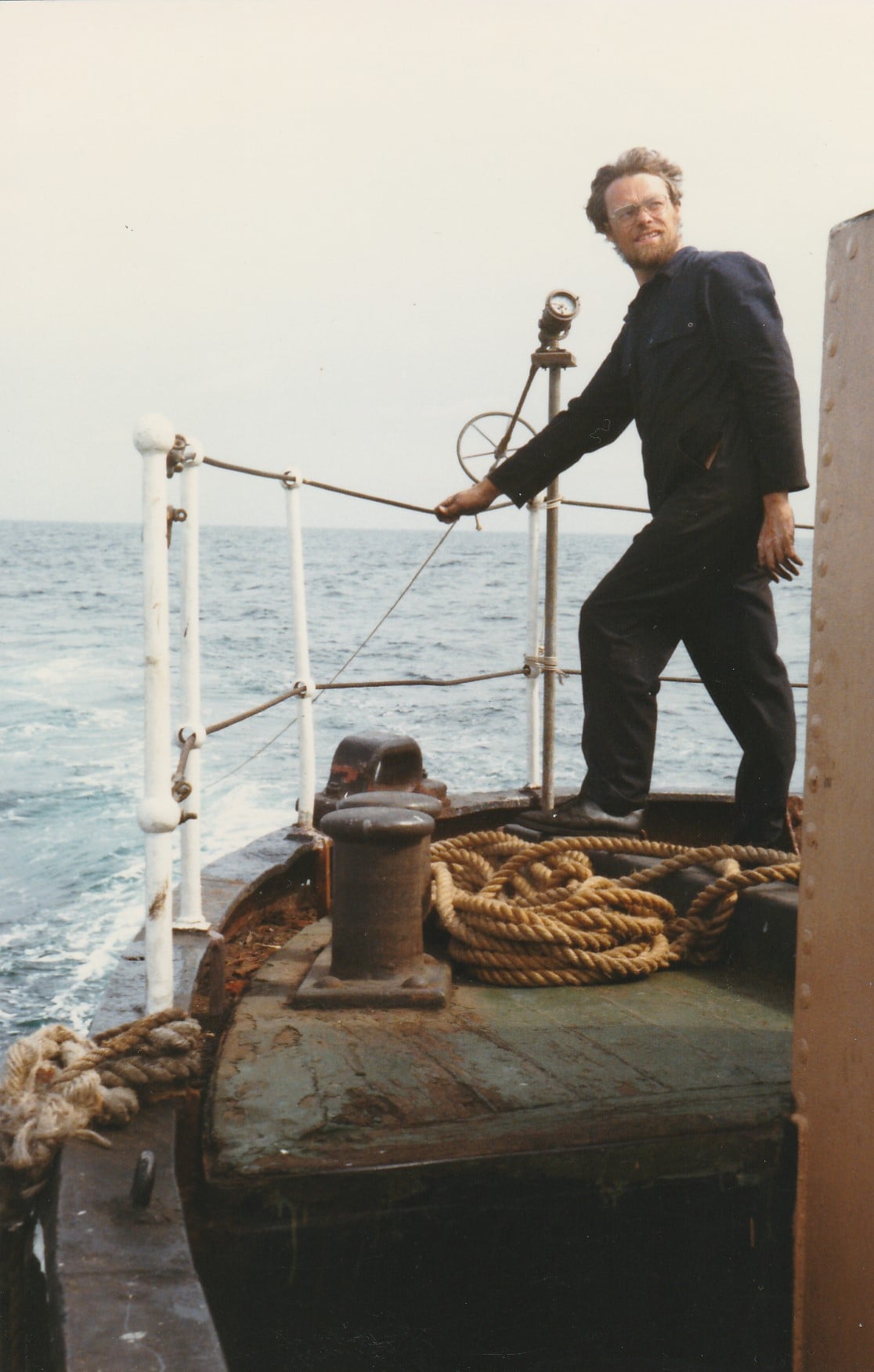 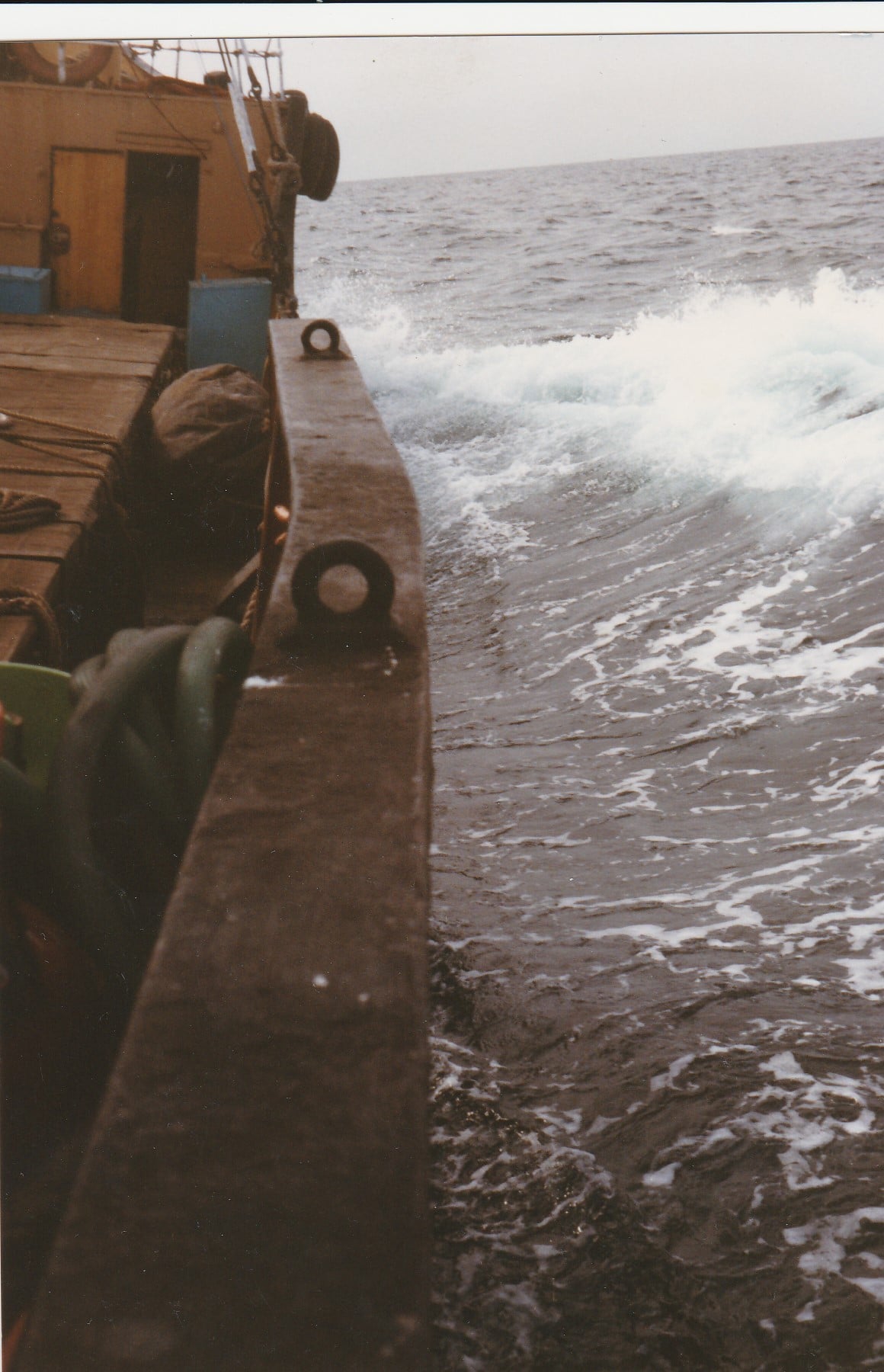